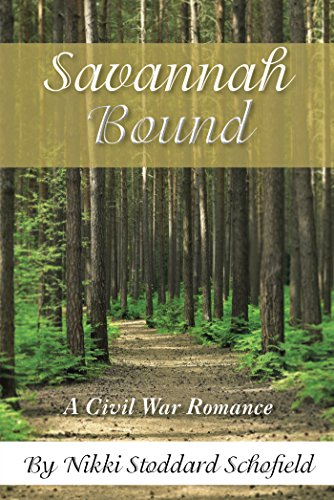 "Many that live deserve death. And some that die deserve life. Can you give it to them? Then do not be too eager to deal out death in judgement. For even the very wise cannot see all ends." - J.R.R. Tolkien, The Fellowship of the Ring

Bondage and Freedom, A Civil War Romance is about guerrilla warfare in East Tennessee with a Yankee nurse, Lydia, who is suffering from post traumatic stress, and Brinton Good, a Confederate captain who does his military duties while also caring for her.

Alas Richmond, A Civil War Romance, is about Verity, a Southern belle, and Giles, an Englishman and a Union spy, during the final days of the capital of the Confederacy.

Treason Afoot, A Civil War Romance, tells the story of the Indianapolis Treason Trials in 1864 in Ms. Schofields hometown. Emeline Tanner and Jay Hadley live through those tumultuous times, which resulted in the U.S. Supreme Court decision of Ex Parte Milligan.

Nikki is currently doing research on her next novel, Confederates in Canada.

From 1974 to 2012, Nikki was the law librarian at the Indianapolis office of Bingham Greenebaum Doll LLP, formerly Bingham Summers Welsh & Spilman. Upon entering phased retirement, she took a second job as the Staff Genealogist at Crown Hill Cemetery, where she works on Fridays. Also at Crown Hill, the third largest private cemetery in the country, Nikki serves as a tour guide specializing in the Civil War personalities.

In October 2011, Nikki began volunteering one day a week at the Indiana State Library, Manuscript and Rare Book Division, where she creates finding aids available on the Internet. Many of the items Nikki summarizes in these finding aids are from Civil War collections. This work enables her to read what people of that era wrote and thought, thus providing authenticity to her novels.

A member of Speedway Baptist Church, Ms. Schofield is an ordained deacon, moderator of the business meetings, adult Sunday school teacher, and assistant treasurer. For five years, she served as one of two representatives from the North Central region on the Coordinating Council of the Cooperative Baptist Fellowship with which her church is affiliated.

As president of the Indianapolis Civil War Round Table for two terms, Nikki was elected for a third term in May 2013. She has also served the club as director for the annual trips, secretary, and newsletter editor.